‘No one’ is an exaggeration, but sometimes very few people actually see what you post on Facebook.

When there were less people total on Facebook, people would tend to see a larger percentage of the content posted. With more people, Facebook filters the posts a lot more. And they also want to make revenue from ads.

For example, one of my friends runs a salsa event here. He’ll post on Facebook and often in a few groups related to salsa. On his personal page (where he has 4,000+ friends) and on the groups, you can see the number of likes/reactions/shares, something like this,

So three people liked it (sometimes it’s a bit more or a bit less), but you really don’t know how many people saw the photo. It’s not listed.

For the same event, I ran a few ads for it, including this one,

32 likes, 2 shares, and it reached 959 people. It includes one of my illustrations.

That last piece of information is something you never see on personal Facebook posts. The number of people who see what you posted.

You can also see that the light orange is a small amount and the dark orange is a larger amount. Most of this reach was paid for.

Basically, ads can be effective, but not all ads work well on Facebook.

Facebook posts/ads can be effective, but often times they are not.

There are many factors that affect a posts reach. They include the day and time when you post and the content as well as the format.

In the very early days of Facebook pages, pretty much everyone saw your posts who liked your page. Then more and more people joined the website. Facebook soon drastically cut back the number of people who would see your page. That was bad in some ways for people with pages but also good for people who saw less clutter. Really good/viral content (not always the same) can cut through. And with ads, you can still get a lot reach, it just has a cost now.

I posted a question one day. It got a few comments but zero likes/shares.

Another time with another statement, I got a few likes

And a bit more reach compared to the first example, but not much more.

On my Sax Station page, I posted a photo internally to Facebook, but I also linked to this website. It did okay, but not great in terms of reach.

Some of my videos on Youtube are fairly popular, but the same video tends to be less effective on Facebook.

Here’s a video where I taught a line of music, but it only got three likes and only 94 views.

Other types of videos can help you get more reach. One video where I played a melody, which was more entertaining than educational was able to spread more.

I also spent some money on that video to make it an ad. Most of the reach is paid (dark orange) some reach is organic (light orange).

This last example is the first where I show paid reach.

Paying for an add acts kind of like a catalyst, you directly pay for some more views but that is also connected to an increase in organic reach.

Now you have seen some results from text posts and video posts. They got a little reach.

You probably noticed that I didn’t pay for ads until that last video. Basically, I look at how well something spreads organically before I decide to pay for an ad. If it has good organic reach, the chances are much higher that paying for an ad will increase the total reach significantly.

Sometimes videos go viral. And you can also write stories that people like and share that many people will see.

From what I have seen, it is easier to use pictures to reach more people.

One picture that I posted on Facebook (that was actually more popular on Instagram) was this one,

It reached quite a few people and got some likes.

Facebook has systems for determining who will see your posts which includes the format (picture/text/video).

Some of my photos reach a decent number of people, but I found that drawings/illustrations can work much better.

You can also use more variety of color, make them bright, etc.

Drawings/illustrations can be of whatever you imagine. I can draw a turkey playing saxophone or a snowman or a pineapple. Humor can be used easily, just think of comic books.

For a few reasons, drawings/illustrations work well for me to reach a bigger audience.

I have been able to get quite a bit of engagement and interaction with the illustrations I have posted online.

The light orange is organic reach, the dark orange is paid reach. With the total number of people reached listed.

You can also see the post clicks as well as reactions/likes/comments/shares.

Under ‘Engagement’ the blue bar is post clicks and the purple bar is reactions/likes/comments/shares.

If you would like to hire me to do a Facebook campaign for you, let me know.

Here are three older illustrations that reached a lot of people. The amount you pay to Facebook for an ad like this that people like and that resonates might be a lot less than you expect. 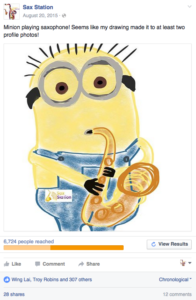 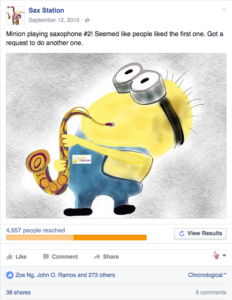 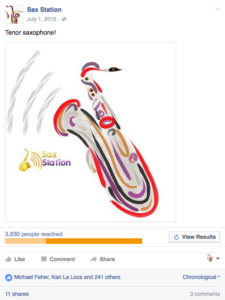